Reflections on "Going to Rome" – a Measured continuing Anglo-Catholic Response 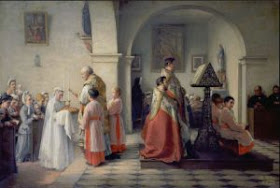 The first point to be made is the issue of “institutional” churchmanship, what some might even dare to call “canonical churches.” (World Council of Churches churches is more what one might dare to mean.) One senses from MNA that the dejection that he feels far surpasses the continuing Anglican’s sense of dejection at not have been chosen instead of Rome. First the “institutional” CofE let him down. Then the Gafcon churches let him down (or at least couldn’t figure out how to keep one of their own from consecrating a female “bishop”). The result of a craving for institutional churchmanship is that you will be disappointed. Rome will even let him down, eventually, if it hasn’t already. But that is the nature of the Church and part of God’s plan. To be in denial that the Church is imperfect and will inevitably let one down is to ignore the opportunity for sanctification.

Some who believe they have a grasp on music say that, after a musician marries, the compositions are no good. It’s the kind of subjective general statement that is hard to prove, but one can see the point. The point is this, creative art comes from tension. Music is, essentially, tension. So is theology. Orthodoxy holds things in balance, in tension. The saddest part of MNA going to Rome is the question whether or not his valuable contribution to Rome concerning the Anglican patrimony will actually be valuable at all. It is true that Newman lectured what we now call The Idea of a University after going to Rome and provided some valuable contributions to Christendom. But the tension was different, of a different quality, like the musician who has gotten himself married. Show me a saint and I will show you a man who has trusted Christ’s Church to the uttermost and has remained in tension with the institutional Church. Such was Bernard. Such was Cranmer, stuck between Luther, Calvin, and Catholicism. Such was any Tractarian always before, not always after, they happened to go to Rome. Genius feeds off of tension and relishes it and the Holy Spirit knows it.

I am not at all surprised by MNA’s defection. I do not find it incongruous with his evangelicalism, but rather consistent. I said some years ago to a colleague that an evangelical Anglican is, in a sense, more likely to go to Rome than an Anglo-Catholic. It is an intuitive statement, and one validated once again. Why? I might hazard a guess. Evangelicals love to be right. They love an equation. Sola Scriptura + Faith Alone + Justification = Salvation. Something like that. A certain segment of Roman Catholicism loves to be right too. But an Anglo-Catholic, a certain kind, even (one might dare to say) the best kind, thrives on tension. As we used to say about working as hospital chaplains, you have to be comfortable with being uncomfortable. But in that discomfort, dogmatically and pastorally, things happen at a sickbed that are absolutely phenomenal, which took things that were “by the book” swirled them up a bit, writing in the process brand new “music” “by the book,” that is, in accord with the rules of music theory, but improvised like jazz into a beautiful godly encounter at a sickbed.

What is getting “let down” by an institutional church? A sanctifying moment. As every pastor knows, step into the hot seat in a parish, cease to be a seminarian, and there is a tension with one’s congregation there that, if persisted in, leads on to glory. Why would the same not hold true in the wider church and for every bishop? So, when we think on MNA going to Rome, it should be lamented, to a certain degree, because, while it is certainly the “death” of an Anglican, it has the potential to be the “death” of a theological artist.

Taking the same metaphor and applying it to the Ordinariate or Western Rite Orthodoxy, we have no doubt that there is creative energy at work, that God is at work, in those ecclesial bodies. We praise God for the recognition by Rome and Orthodoxy that the worship of the Book of Common Prayer is genuine worship – but we knew it all along! Yet these chimeric ecclesial bodies, when it comes to liturgiology and spirituality, we also know both to be truncated systems of the Western tradition. Technically, to be Western Rite Orthodox one must disregard some rules of Orthodoxy or excise everything of the Western Tradition after 1054. Technically, to be Ordinariate one must do the same with everything after 1537 or 1559, or something like that.

Unfortunately, to do so is like cutting out a piece of what one considers bad intestine in the middle and trying to reattach everything. It works, but the stomach isn’t really ever the same. Anglicanism, the good, the bad, the ugly, the indifferent, like any good, bad, ugly, indifferent tradition (which is what they all are) is a living tradition. You can’t skip steps in Math or Living Traditions. 2 + 2 + 2 = 6. 2 + _ + 2

6. To do so is as detrimental to a living society as removing Civil War monuments.

The need for peace and safety is a noble desire, but not perhaps the best and noblest desire. Trollope’s Mr. Arabin had to learn the creative, sanctifying, tension that existed with an institutional church after Newman went to Rome. “It was from a poor curate of a small Cornish parish that he first learnt to know that the highest laws for the governance of a Christian’s duty must act from within and not from without; that no man can become a serviceable servant solely by obedience to written edicts; and that the safety which he was about to seek within the gates of Rome was no other than the selfish freedom from personal danger which the bad soldier attempts to gain who counterfeits illness on the eve of battle.” So Francis Arabin was able to say to Mrs Bold concerning tension in the ecclesiastical society, “More scandal would fall on the church if there were no such contentions. We have but one way to avoid them – that of acknowledging a common head of our church, whose word on all points of doctrine shall be authoritative.” “Had it pleased God to vouchsafe to us such a church our path would have been easy. But easy paths have not been thought good for us.”

Certainly, many who have eventually gone to Rome have read these words by Trollope, and many other words like them, and have gone anyway. But there is something really sad and missed out on in doing so. We might ask, has just enough been offered to those of the Ordinariate and the Western Rite by way of peace and safety that while effective sacramentally, they are, in fact, ineffective as a living tradition? Officiants of the Liturgy and dispensers of the Sacraments are essential to the life of the Church, but continuity in Holy Tradition preserves both the Sacraments and the Divine Life in a way that is most helpful to our sanctification, not simply essential. We have nothing to fear from tensions, even from heresies. Charles Grafton wrote in Catholic and Christian, “these errors lead to their own cure. The divine life of our Church is no more forcibly shown than in her inherent power of self-purification. Christ is in her, and she shares in His indestructible and resurrection life. The faith is preserved in her, not by ecclesiastical trials, necessary as they must be. Extremes lead to their own elimination . . .”

Evangelicalism when radical confessionalism (stuck on Articles and Gafcon statements), and Romanism as rabidly stuck on volumes of dogmas and canons, are really two sides of the same coin – a hesitancy to allow the Living Tradition to swallow up the imperfections. This leads to institutional contrivances for the sake of institutional integrity (meaning cohesion and not real integrity), and it appears it can also lead to burnout in good bishops who have served institutional churches in good conscience.